NAUGHTY OR NICE?
Is Santa really one to judge?

In a very Futurama-esque turn of events, Santa Claus himself has turned out to be naughty.

The alleged naughtiness comes as a result of the distribution of flyers all over the world by Santa little helpers, The Neptunians. It seems the old man has gotten lazy and is fed up with travelling the world with ever heavier "toys and stuff for those ungrateful brats who just want more and never thank me". The Neptunians have stopped the manufacturing of toys and stuff and it may be some time before the work will start again - if at all.

Completely unrelated to that other article, The Madness wishes all its readers and all the stupid non-readers, a very merry Christmas.

The entire staff behind The Madness will take a well earned Christmas vacation in the cold belly of Santa's homeland.

We'll be back! Hopefully on track for the new year. Keep reading The Madness!

One down. Five to go.

The creative genius of Mr. Madsen has already completed one sixth of his second Bachelor degree.

one happy chappy!
The Madness would, at the same time, like to apologise for falling behind on the deadlines for the last two issues. It's all Mr Madsens fault really! Selfish and egocentric that he is, he has been studying for his exams rather then concentrate his efforts into the publishing of new issues of this here site, which nobody ever reads. Thank you very much.

The once proud piece of electronics that was the Madsen households television is no more.

After five years of constant abuse through daily movie screenings and countless victories over the infidels (det e deg Tonheim!), the lights are now out for the Grundig.

Christmas is a time for the giving of new stuff...

This time The Madness is proud to present a very special christmas treat to all its readers. We give you:
SANTAS WORKSHOP!
Presented in red font for a full christmasy satisfaction
Many believe that Santa Claus live on the North Pole. Those of you who don't, probably believe that Santa's workshop and home is in Finland. This is of course not true. Santa lives in Norway and has always done so! Let's take a look shall we... 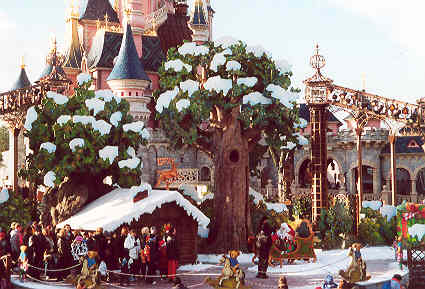 Santa's village is filled with joy and laughter. However, as a precaution , bring earmuffs as the constant chanting can get to you after a while. For travellers we would advise not to go during the month of December, as Mrs. Claus can be quite a bitch at this busy period of the year.

Go and be merry! All visitors get a gift!

Over the last few weeks the faithful readers of The Madness and its attached guestbook, will probably have noticed that the guestbook, intended mostly for praise, has been used as a means of communication between two, as of yet, unidentified parties.

The communication seems to be largely based around animal movements. There has even been talk of brutally slaying an elephant!

It has not been possible for The Madness to contact or trace the intruders, but encourage its readers to pay close attention and to please report any more suspicious behaviour.

No actual pictures excist of Santa's Workshop. We will just have to trust the good people at Disneyland for accurate recreations.

Finding Santa's village is a feat all on its own. Understandably Santa is hiding. However, if you search deep in the whitest forest of Norway, somewhere to the east, you might come across this sign ---------------------------------------> It is of course a decoy, set out to confuse those who seek the secret refuge of the most elusive, yet most famous, man alive today.

But fear not. You have not reached the North Pole of the earth, but mearely a small village cunningly disguised by the very same name. Continue due south (!) from this sign, for about 2000 kilometres, into the mystery white forest.

If you make it there, Santa's Little Helper will prepare a feast in your honour. Boy can they party!