A new year is upon us. Another year of hopes and dreams that eventually amount to nothing. Let us not kid ourselves believing that this time around we'll get it right. The dust will still settle in huge quantities in that one corner of your livingroom and your love life, should you be lucky enough to have one, certainly won't be getting any better.

Having consulted the stars, The Madness is very pleased to present its readers with the only honest horoscope for 2006. Bring It On!

And of course, if you don't have one, you shouldn't expect to gete one this year either! You'll be sad and miserable, but you'll always have a friend in The Madness!

The only way to get through is to follow The Madness. We'll guide you through. Trust us. After all, it can't possibly hurt! 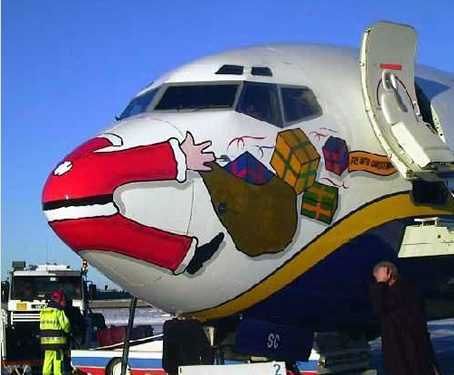 Did you ask Santa Claus for something this christmas, but got nothing? Here's why!

On his route across the world to deliver happyness and joy to mankind, Father Christmas was hit head on by another aircraft, carrying tourists to The Holy Land.

Miraculously, Father Christmas survived the ordeal and assures us that he'll be back next christmas, but with seatbealts fastened.

OUCH!
I was down at Sainsbury’s recovering from New Years,
When across my path scuttled four little ears.
Both pairs belonged to rats,
Dressed in tails and shirts and big top hats.
While it was quite clear my celebrations were done,
I can confidently say the rats had just begun.

January marks the beginning of a new year. But as sure as another day will come, stuff you bought before christmas suddenly costs half price in January. However, we don't care. After all, we're not Scottish or even Møringer.

The latest trend is to also sell creative work at reduced prices. artists all over the world are cutting prices for their work. The Madness has been fortunate enough to secure the latest works by renowned writer/journalist, Mr. Hugo Gladstone. Apparently he has breakfast several times a day and was willing to part with his work for two croissants and a cup of tea. We are indeed fortunate and we hope to read more of his work at The Madness. Enjoy!

Only this morning, I was on the phone,
Trying to pay the rent for my home.
At the same time I was making a cuppa,
For I hadn’t had much since last night’s supper.
I bent to the fridge and opened the door,
And to my great horror, something fell to the floor.
‘Oh no’, I said, ‘I’ve broken a plate’,
But losing a fruit salad is the real thing I hate.

Travelers should beware that oil literally flows in the streets along with the sewage. It is advisable to bring wellingtons.

Tash Kumyr has a booming mining industry. During the summer months the state are actually hiring visitors to work their mines. The state department informs us that it is primarily visitors from Columbia, Bolivia and Australia who receive this special offer.

Go there, but don't stay too long.

In the Far East , neighbouring mighty China lays the country of Kyrgyzstan . An old Soviet province, now abandoned in the high mountains of the area, it as a cold a dreary place, yet a place not to be forgotten.

Travelling through Kyrgyzstan one should look up the small city of Tash Kumyr . Just south of the second largest lake in the country, on the Naryn River , it is a delightful place with a fascinating history. Although the Soviet rule destroyed most of this rich and potentially prosperous place, the people living there has never lost hope and is praying for some rich schmo to invest money in the rich geological potential of Tash Kumyr.

The Province of Tash Kumyr is said to be the site of one of the largest and easiest accessible oil sites anywhere in the world.

Downtown Tash Kumyr
But fear not brave traveller! For there is much more in Tash Kumyr then its vast supplies of oil! In downtown Tash Kumyr, next to the largest kiosk in the country, lays the Tomb of the Unknown Nomad. A must see! 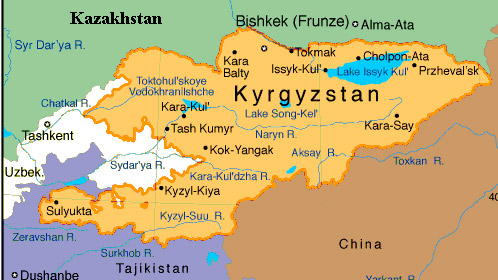 The proud nomadic history of Kyrgyzstan ’s population has its roots from Tash Kumyr. It was here that the first nomads pitched their tents over three thousand years ago. This proud history lives on even today, as children are born into the nomad lifestyle.

The people of Tash Kumyr have recently finished the reconstruction of what was once Kublai Khans' private stable and farm. This is a project the entire city has been involved in and the results are phenomenal! One can literally smell the horse manure.